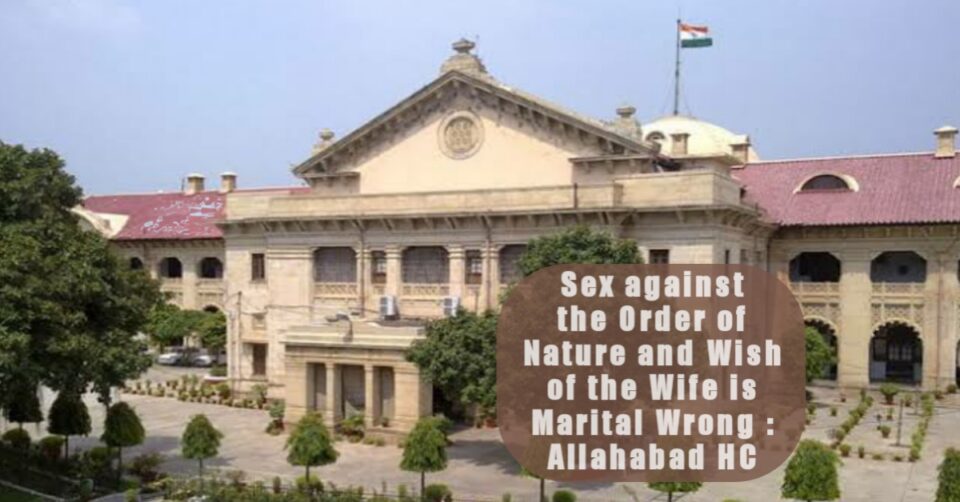 The bench of Justice Pradeep Kumar Srivastava and Justice Shashi Kant Gupta at Allahabad High Court observed, Sex against the order of the nature, against the wishes of a women is not only a criminal offence but also a marital wrong.

Both the husband and wife were in Second Marriage. The marriage solemn on Jul 1, 2012 according to Hindu rituals and tradition in Arya Samaj Temple, Aryanagar, Ghaziabad. The women-respondent has two children from the first marriage while the husband-appellant was a divorcee.

The ld court considered three grounds of divorce namely, whether husband made unnatural sex, or beaten and called characterless or demanded 40 lacs rupees and car. The Court said:

“There can be no doubt that forcible unnatural sex, beating, calling characterless and demanding dowry are different facets of cruelty.”

The husband denied all the allegations. He also argued that, he spent Rs 82,000 for admission in school of her children and also alleged that he was misbehaved by his father-in-law. He stated in his reply :

“The marriage was consummated and they stayed for two days in Hotel Country-Inn, Sahibabad. In the age of 42 years, the purpose of the marriage for him was to accept her and two children and prior to marriage, he got the children admitted in a school in which 82,000/- was spent by him. On 03.07.2014, at the time of Vidai Ceremony from Ghaziabad to Chandigarh, he was misbehaved by her father, brothers and maternal uncle and she was not permitted to go with him.”

The Ld trial court went through the evidence on record and found that:

“the petitioner-wife alleged and proved by her statement that on the first night after marriage, the defendant-husband committed unnatural sex on 1.7.2012 and 2.7.2012 and on her refusal he did mar-peet with her, whereupon, she went to her parents. On 17.7.2012, the defendant-husband came to her and regretted on his misdoings and apologized in writing through an affidavit and promised not to repeat and to keep her happy. He also stated that he has no doubt on her character.”

The husband argued that, “medical report has been ignored and the court has relied upon the unsupported solitary statement of the plaintiff-wife by ignoring contradictions in her own testimony. Her relatives are in the business of property dealing and are engaged in cheating. . There was material defect in the whole procedure”.

The husband also argued that, “the fact of unnatural sex is not supported by any medical evidence and the medical/ pathology report which was conducted in respect of stomach pain, the report of which has been filed by the defendant-husband, does not support such allegation.”

The bench agreed with the Ld court observation that, independent evidence may not be possible because matrimonial wrongs have been taken place inside the matrimonial home.

Then bench also said, “So far as medical evidence is concerned, the petition for divorce has been filed much after the date of incident of unnatural sex and sodomy and no medical report could support the same. Moreover, women in our country are modest by nature and their natural instinct is to conceal such thing because of natural shyness.”

The bench also said that, cruelty is not defined in the Hindu Marriage Act. The bench referred the citation of of The Supreme Court as in Mayadevi vs. Jagdish Prasad, AIR 2007 SC 1426 as:

“expression ‘cruelty’ in Section 13 has been used in relation to human conduct or human behaviour in respect of matrimonial duties and obligations. Cruelty is a course or conduct of one, which is adversely affecting the other.”

“In Anjula Verma vs. Sudhir Verma, AIR 2002 SC 1447, the Supreme Court has remarked that the foundation of a sound marriage is tolerance, adjustment and respecting one another. Tolerance to each other’s fault to a certain bearable extent has to be inherent in every marriage. In Ravi Kumar vs Julmidevi, (2010) 4 SCC 476, cruelty was interpreted to mean absence of mutual respect and understanding between spouses which embitters relationship. As held in Vishwanath Agrwal vs Sarla Vishwanath Agrwal, (2012) 7 SCC 288, it always depends on social strata or milieu to which parties belong, their ways of life, relationship, temperaments and emotions that are conditioned by their social status. It was pointed out in K S Sriniwas Rao vs D. A. Deepa, (2013) 5 SCC 226, that it is evident where one spouse so treats other and manifests such feeling which causes reasonable apprehension in the mind of other that it would be harmful or injurious to reside with other spouse. In Gurubux Singh vs Harminder Kaur, AIR 2011 SC 114, it was opined that isolated frictions on some occasion does not amount to cruelty. All quarrels must be weighed in determining cruelty in each particular case, keeping in view the physical and mental conditions of the parties, their character and social status. A too technical and hyper-sensitive approach would be counter-productive to the institution of marriage. The Courts do not have to deal with ideal husbands and ideal wives. It has to deal with particular man and woman before it. The ideal couple will probably have no occasion to go to Matrimonial Court.”

The bench also refered citations in which “sexual intercourse against the order of the nature or sodomy or unnatural sex or oral sex is a marital wrong and a ground for dissolution of marriage”. In Bini T. John (supra), it was held:

“Sex plays an important role in matrimonial life. Therefore conduct of one among the parties towards the other in the matter of sex is an important factor in the married life. Insistence of unnatural sex, continued compulsion for oral sex, sex through anus causing pain and physical injury to make the wife to concede to such unnatural sex will certainly amount to cruelty.”

The bench also observed that, “respondent-wife has stated that the husband made sexual relation against her wishes like a beast forcibly in a very brutal and cruel way against the order of nature several times and committed sodomy and unnatural sex. The appellant husband did not put any question in her cross-examination nor made any suggestion of falsity on this point. Even in his written statement, he has expressed his denial only saying that all alleged grievances may not be possible in short span of only about 15 days. He has stated what has been done by him for the children of plaintiff-wife, for her or for her parents.”

“Unnatural sex, sodomy, oral sex and sex against the order of the nature, against the wishes of a women or wife or anybody is not only a criminal offence but also a marital wrong and amounts to cruelty which is a good ground for dissolution of marriage. Any such thing which brings the wife to indignity and causes physical and mental agony and pain is cruelty. Forcible sex, unnatural or natural, is an illegal intrusion in the privacy of the wife and amounts to cruelty against her.”

The bench dismissed the appeal, and said:

Happy Married Life does not proved by Photographs in Happy Mood : Kerala HC

Woman came on Roof in ‘Sholay’ style , threatened to Jump off for lost Job

Family a place of inequality and violence for women : UN

Nana Patekar’s mother passed away at age of 99