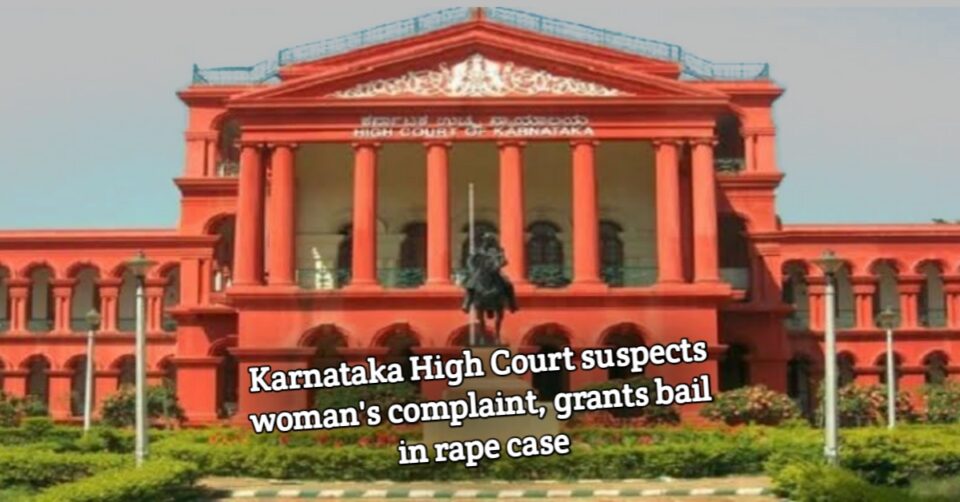 Karnataka High Court bench of Justice Krishna S Dixit suspects the woman’s complaint, granted bail in the rape case. Bench observed delay in notifying the authorities, while the complainant woman stated that she fell asleep after the alleged crime.

In the case, the bench also referred to the complainant’s version where she said that she had dinner with the petitioner at the Indraprastha Hotel, then they consumed alcohol sitting in the car. On this, the bench observed that the complainant woman did not alerted any authority or public for misconduct and found this a major ground to granting bail.

“the version of the complainant that she had been to Indraprastha Hotel for dinner and that the petitioner having consumed drinks came and sat in the car, even if is assumed to be true, there is no explanation offered for not alerting the police or the public about the conduct of the petitioner;”

The bench also observed that she went to office at night, stayed till morning and allowed the petitioner to stay with her till morning. On this, the complainant woman explained that she had fallen asleep because she was tired of the alleged crime.

“nothing is mentioned by the complainant as to why she went to her office at night ie., 11.00 p.m.; she has also not objected to consuming drinks with the petitioner and allowing him to stay with her till morning; the explanation offered by the complainant that after the perpetration of the act she was tired and fell asleep, is unbecoming of an Indian woman; that is not the way our women react when they are ravished;”

The bench also observed that a letter from the complainant to the petitioner where she was ready to withdraw her complaint on compromise.

The bench also said that, not only is seriousness a criterion, it should also be a prima facie case.

“the offences alleged against the petitioner being punishable u/s. 376,420 & 506 of IPC, 1860 and Sec.66- B of Information Technology Act, 2000 are serious in nature, is arguably true; however, seriousness alone is not the criteria to deny liberty to the citizen when there is no prima facie case from the side of the State Police;”

Tamil Nadu : Father-Son duo died in Police custody for opening shop in #Lockdown beyond the time